Cells are the fundamental living unit of biological tissue. They are surrounded and contained by a lipid membrane that serves to separate the intra- and extra-cellular environments. Inside the cell are molecules, usually proteins, which carry out its operative functions. Both proteins and membranes have specific three-dimensional structures, called conformations, critical to their ability to function. If its conformation is lost, the protein or membrane is considered denatured and the cell can no longer function normally.

Animal cell membranes consist of lipid surfactants and proteins stabilized by water adherent to the membrane surface. Because cell membranes are stabilized primarily by water adhesion and not bonds, their structural stability is generally less than that of proteins. Yet, the integrity of this barrier is critical to cell viability because most of the cell’s metabolic energy is devoted to maintaining concentrations of salt ions inside the cell different from those outside the cell. The combination of fragility and vital function makes the outer membrane the critical point of vulnerability in most forms of trauma.

Membrane disruptions lead to cellular death by several mechanisms as illustrated below.

First, pores in the membrane result in the leakage of ions across the membrane. Disruption of salt ionic gradients results in the exhaustion of cellular energy fuel (ATP), which leads to metabolic arrest. Secondly, the leakage of extracellular ions such as calcium into the intracellular space initiates a series of biochemical pathways that can be very damaging to the cell. Thirdly, intracellular contents important for cellular functioning leak out of the cell.

In summary, loss of cell membrane structural integrity results from all forms of trauma as well as from the most common fatal and disabling diseases such as myocardial infarction and stroke. Collectively, these conditions represent the principal cause of injury and death in humans. Thus, a safe, practical and effective pharmaceutical strategy to restore membrane function would have a widespread impact on human disease to an extent unparalleled since the development of antibiotics.

One class of synthetic surfactant chaperones that has a well-demonstrated ability to repair damaged cells is the non-cytotoxic, nonionic surfactant, composed of a polypropylene oxide (PPO) subunit between two polyethlyene oxide (PEO) subunits. By connecting hydrophilic and hydrophobic polymers together, the resulting molecule becomes an amphiphilic copolymer, which behaves like a surfactant. Added to water, surfactants are attracted to other surfactants or to locations where there is an interface of hydrophobic and hydrophilic domains. If the cell membrane is disrupted or a protein is denatured, this hydrophobic-hydrophilic interface changes and surfactants are attracted to the site.

One commercially available surfactant chaperone, PEO-PPO-PEO, called Poloxamer 188 (P-188) was approved by the FDA nearly 50 years ago to reduce viscosity in blood prior to transfusion. It has been proven safe and effective since its initial release; surfactants related to P-188 are used in many over the counter products such as toothpaste and mouthwash. For years, hematologists observed the effects of this surfactant chaperone on protein solutions and blood viscosity, but no one knew its capability to repair damaged molecules and cells.

In roughly the late 1980’s, Dr. Raphael Lee, Maroon Biotech’s founder, discovered P-188’s capability to heal wounds in cellular membranes and refold denatured proteins. Natural proteins that perform these tasks are called chaperones because they guide or “chaperone” membranes and proteins to their proper form.

P-188 and other PEO-PPO-PEO copolymers have been extensively studied since the late 1980’s and have been shown to seal cell membranes damaged by a number of different mechanisms. (see Bibliography) PEO-PPO-PEO copolymers work by first localizing to damaged cell membranes. This characteristic allows low systemic concentrations of the drug to result in high local concentrations at the therapeutic target sites. This is a major advantage over highly polar polymers, such as polyethylene glycol (PEG), which distribute uniformly in solution and so must be applied in high concentrations. Once at the membrane, PEO-PPO-PEO inserts into the damaged sites and induces holes in the membrane to seal. It may do this by lowering surface tension in the membrane, thereby allowing phospholipids to “bridge the gap” in the membrane. After the cell membrane is healed, PEO-PPO-PEO is “squeezed” out of the membrane and flushed out of the body with a half-life of about 1 day. Thus, these synthetic surfactant chaperones can safely heal damaged cells that would otherwise be destined for death.

The experimental data shown below (see Lee et al) demonstrate the implications of surfactant chaperone technology. Rat skeletal muscle cells were infused with dye to measure cell damage. The percentage of dye remaining inside the cells is shown on the vertical axis. If the cell membrane is intact, 100% of the dye remains in the cell. After 5 minutes, the cells were shocked at 200 volts/cm (E). One minute later (t = 6min), cells were treated with P-188. After 8 minutes, cells treated with P-188 had sealed their injuries and stabilized. Cells left untreated (the “control” data line) continued to leak and eventually died. 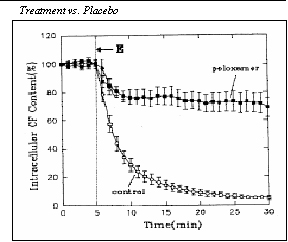 Another experiment, depicted in the series of images below, demonstrates P-188’s ability to seal damaged neuronal cells. Rat hippocampal neurons were harvested and loaded with a fluorescent dye. Sham cells, the control, were left untreated (left panel). The middle panel shows cells that were treated with N-methyl-D-aspartate (NMDA), a toxic neurotransmitter that induces cell death and is believed to play an important role in neuronal injury. These cells, located by red dots, died. Cells treated with NMDA and P-188, however, retained their viability and survived (right panel). The neuroprotective effect of P-188 is equally strong in live animals.

P-188 represents the most effective neuroprotective agent that can be used after brain cell injury occurs. Nearly all other agents must be administered prior to injury in order to reduce trauma. In laboratory experiments, these polymeric surfactants have even restored motor function to paralyzed animals, revitalized dying neurons and protected neurons from damage. Results from one such study are pictured here. After injection of a neurotoxin, the animal on the right received surfactant solution while the animal on the left received only saline solution. The area of brain tissue death is surrounded by dotted lines. The treatment enabled a significantly greater area of the brain to survive.

The University of Chicago has developed novel intellectual property around the use of biocompatible surfactants to assist proper folding and refolding of proteins which has been licensed to Maroon. The mechanism by which surfactant chaperones do this is illustrated below. When a protein is denatured, it becomes stabilized in a new conformation by its interaction with the water molecules surrounding the protein. When certain classes of surfactants are added, their hydrophobic sections (blue segment of surfactant copolymers illustrated below) are attracted to hydrophobic regions of the protein. This puts highly polar parts of the surfactants (pink) into the water surrounding the protein, allowing the surfactants to disrupt the water structure, lower surface tension and facilitate refolding. While there are many folding agents that are effective, multiblock copolymer chaperones are effective at concentrations well tolerated by the body.

Maroon’s scientists, with an advanced understanding of the pharmacology of such copolymer chaperones, are developing formulations of a combination therapy with complementary compounds that will allow synthetic chaperones to be used at concentrations below those which cause undesired side effects. This “cocktail” will enable Maroon Biotech to administer a therapy that is safe in the body. The Maroon development team is also using its knowledge of surfactant chaperones to explore the possibility of inventing new, more effective compounds.